Kyrie Irving Bio: 2011, the year that Kyrie Irving arrived in Cleveland as the No. 1 draft pick, was the beginning of a new era in Cavaliers basketball. Irving’s arrival came at the perfect time for the recent power of the Cuyahoga, (The County where Cleveland is located, named after the mighty Cuyahoga indians) as it followed one of the darkest seasons in the Cavaliers’ 45-year history.

Not only had Cleveland lost LeBron James to Miami in free agency the year before, (when he took his talents to South Beach) but the Cavaliers had completed an embarrassing 19-63 campaign that saw them lose 22 consecutive games, a drastic fall for a team that was a perennial championship contender as recently as the previous season.

In Kyrie We Trust!

Into the void stepped the consensus top amateur player in 2011, the Australian-born Kyrie Irving. Though hampered by an injured big toe that allowed him to play just 11 games in his Duke career, the guard’s phenomenal skills were obvious, possessing the vision to find a teammate on the fly, the agility to get into position, and the marksmanship to nail an open look at the basket.

Gradually, Kyrie Irving helped build the foundation to resurrect the Cavaliers from one of the league’s worst teams into a true contender for the title. The Cavaliers recognized what they had when after two seasons they inked him to a five-year, $90 million contract extension ($18 million / year) in 2014.

Their faith was almost instantly rewarded. When James returned to Ohio, Irving had created the atmosphere that allowed the league’s best player to take the Cavaliers over the hurdle that stymied his first tenure in Cleveland.

In two seasons alongside Kevin Love, Cleveland’s Big Three produced 110 regular-season wins, two Eastern Conference championships and the real pinnacle: bringing the city of Cleveland its first championship of any kind since 1964 by dethroning the Golden State Warriors in the 2016 NBA Finals. 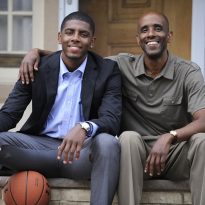 Kyrie’s Mother passed away when he was only 4 years old, so the responsibility of raising Kyrie fell on his dad, Drederick’s shoulders . Throughout his son’s life, Drederick was never willing to let Kyrie settle for less than was possible for him to achieve, both on and off the court.

For the guard from West Orange, N.J., hunger and humility are values that his father Drederick instilled in him at a young age.

Whether it was in the classroom, in the home, or in the gym, Drederick always made sure that Kyrie set a reasonable goal for himself, a value that Kyrie still practices and plans to pass on to his daughter as she grows up. Often, he writes down both his goals and inspiring quotes to help guide him throughout the season and throughout his life. 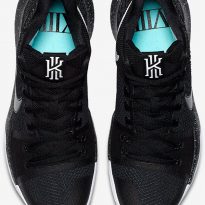 A large part of Irving’s success in resurrecting the Cavaliers has been having the right shoes on his feet. There might be no position where shoes are more critical to success than a guard in the NBA because of the need for quick thinking and decision-making; and that’s before throwing in the nasty crossover dribbles that make a guard like Kyrie Irving so difficult for opposing defenses to stop.

When trying to knife through a defense to create a shot for either himself or a teammate, Irving often has to maneuver through a small window, with no more than a split-second to make his decision on which way to take the basketball before the defender realizes what he’s doing and cuts him off.

Executing such a move requires a lightning-fast first step and complete trust in your shoes’ ability to hold their ground in response to the force placed on them. You might say Kyrie’s shoes are the literal foundation of his success. 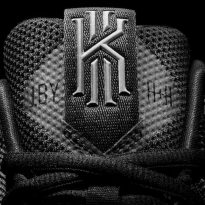 The Kyrie 3 shoe grants that freedom of motion with its pair of traction pods, giving the wearer total control over when they stop and where they stop. In the NBA, that can be the difference between creating a basket and creating a turnover.

“This game is separated by very finite moments where you have to get your shot off,” Irving said. “My shoe speaks to that. Being able to stop on a dime and cross over and go another direction, I can’t wait for players to try it.”

The Kyrie 3 highlights Irving’s unique style and personality in ways that go beyond his skills on the court. Each shoe is adorned with abbreviations of two of the quotes that have shaped his life from his earliest days:

The shoes also have the roman numerals, “VIII” and “XIII” (the same numbers that are tattooed on his wrist) as a reference to his late mother’s birthday & death. Also, on the sole you’ll see the names, “Azurie“ and “Elizabeth,” the names of his daughter and wife.  Click to view larger: 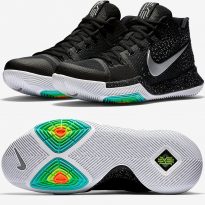 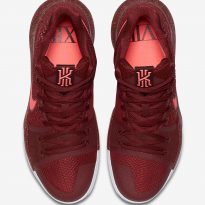 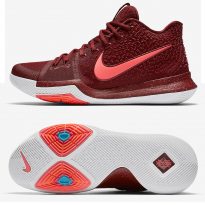 Tip: If you’re looking for the latest Kyrie shoes, Foot Locker and Finish Line have the best selection online and almost identical pricing:

*You won’t ever find coupons for the newest Kyrie shoe release anywhere, but you might find kyrie shoes on sale, or get free shipping. Promo codes might work towards older styles, like the Kyrie 1 or kyrie 2. 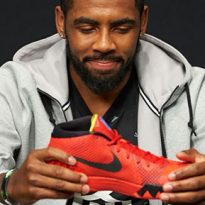 Irving’s dedication to success and hitting his goals have been evident in his consistency with the Cavaliers. Through his first six seasons in the league, he has never averaged fewer than 18 points per game, and his free throw percentage, a mark of concentration and mental fortitude, has never been below 85.5 percent, an average that usually ranks in the top 25 in the entire league.

Other career highlights include:

More important to Kyrie Irving than his individual stats has been the continued upward trajectory of his team. With the Cavaliers again among the NBA’s elite franchises, Irving seems poised to continue the success that has made him one of the NBA’s most exciting and productive competitors for years to come.